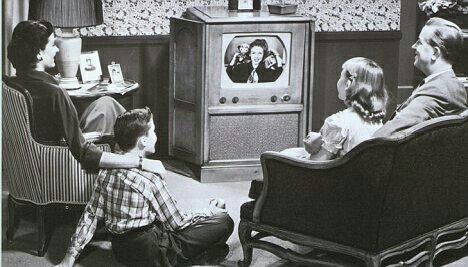 The first time the medium of television had become commercial in the United States was in New York City in 1941. In the forties, there were only a few TV stations, but the FCC began handing out more broadcasting licenses the following decade, which is what led to the large number of programs in the 1950s.

Before the TV shows came into their own with quality drama and groundbreaking sitcoms, early television consisted of radio holdovers like westerns, police procedurals, thrillers, soap operas, music and opries, as well as reruns of theatrical short films like the Looney Tunes, Little Rascals and Three Stooges shorts.

Many of the early TV shows were modified versions of radio shows, but the medium began showing its superiority over radio when sitcoms like I Love Lucy took advantage of physical comedy to get laughs. Talk shows and saturday morning cartoons also debuted in the fifties, and eventually a variety of genres started dominating the air waves to get people’s attention.

Back then it was NBC, CBS and ABC. Now there are a million other options across broadcast television, cable television, premium cable, and the internet, all targeting, and therefore dividing, many different audiences young and old who have different tastes. Here are the different types of programming out there today:

This genre consists of men and women sitting in front of a camera and talking directly to viewers about things happening in the world. There are many different formats for this.

Game shows were introduced in radio but they obtained a new life on television with more elaborate prizes. Popular game shows include Jeopardy!, The Price is Right, Family Feud and Who Wants to Be a Millionaire? They air in the daytime, the evening and sometimes prime time.

A radio holdover consisting of elaborate dramatic stories designed to hook viewers with interesting characters. These have declined in popularity when more women started getting jobs and weren’t home to listen to them anymore.

Scripted programming that usually revolves around a primary cast of characters getting in various predicaments from an episodic basis. No doubt a radio holdover but vastly evolved in the television era. The ability to show subtle acting led to better writing.

Popular scripted comedies, popularly known as sitcoms, include I Love Lucy, All in the Family, Seinfeld, and Friends.

Popular dramas, which could range from crime dramas, medical dramas, and westerns, include Gunsmoke, Law & Order, ER, and The Sopranos.

Anthology and variety shows were two other popular forms of drama and comedy, although both are not as popular as they once were. Popular shows of these kind include The Twilight Zone and Saturday Night Live.

These are shows that create the illusion of spontaneity but are primarily staged to create drama. These include reality competition shows (The Bachelor), family-based shows (Keeping Up with the Kardashians) and occupation-based shows (The Deadliest Catch).

Live broadcasts of sporting events like boxing, pro wrestling and the Super Bowl have been popular since the beginnings of television.

These are the advertisements inbetween the programs. We may hate them, but without these 30-second ads full of Geico geckos and off-putting announcers, television could never be free.

Infomercials are longform versions of commercials. They have been known to air on off-hours and are notorious for scams, but that hasn’t stopped them from remaining popular.

And these are just the barebones genres. The sub-genres inbetween are endless. The amount of variety on television today is purely a result of the rise of the “individual viewer” throughout the 20th century, which led to more personal and artist-driven shows. You couldn’t get away with only having three networks today anymore than you could get away with a show like Curb Your Enthusiasm in the fifties, and the state of television today is all the better for it. Just give me endless programming options, a flat high-definition screen and a bag of Doritos and I’ll be happy.