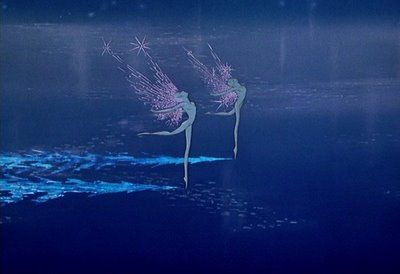 This segment depicts fairies sprinkling dewdrops throughout the forest and jumps to various elements of nature dancing to Tchaikovsky’s music as the seasons change from summer to autumn to winter for a snow filled finale.

There is no plot in this segment as the animators attempt to elicit an emotional response solely out of their nature-themed interpretations of the music. Walt could not have picked a better composer for this fairy-filled trek through nature as Tchaikovsky has always evoked gentle beauty in works such as The Nutcracker, Swan Lake and Sleeping Beauty. And the animators put their creativity to the test animating fantastic aspects of nature that are inspired by the realistic, including dewdrop fairy animator Les Clark who studied the movements of hummingbirds in order to animate them convincingly. 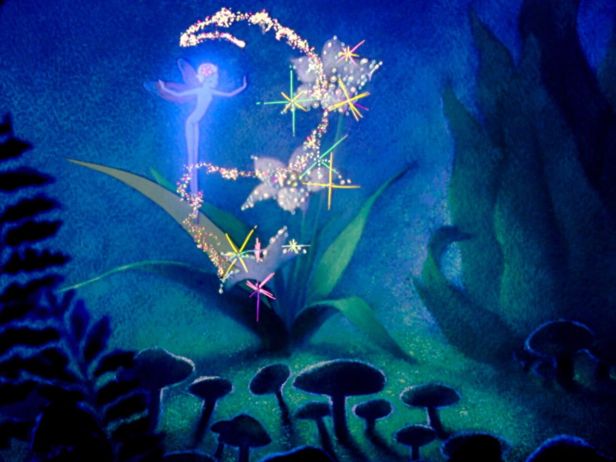 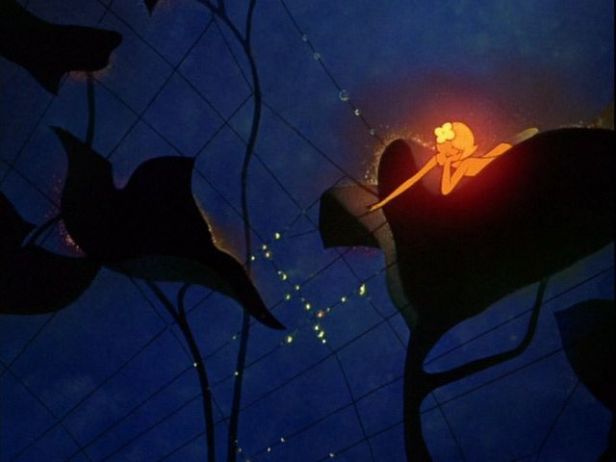 After meeting the fairies in the “Dance of the Sugar Plum Fairy” number, we are introduced to a group of adorable mushrooms in the “Chinese Dance” number. 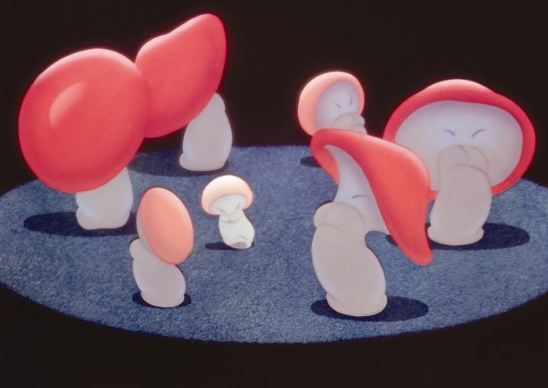 The original concept for this scene involved oriental lizards dancing for a frog mandarin. The mushrooms, which director Samuel Armstrong asked character designer John Walbridge to create, originally had minor roles as lamplighters but Walt loved the design of the mushrooms so much that he decided to axe the lizards and the frog and make the mushrooms the center of the piece. 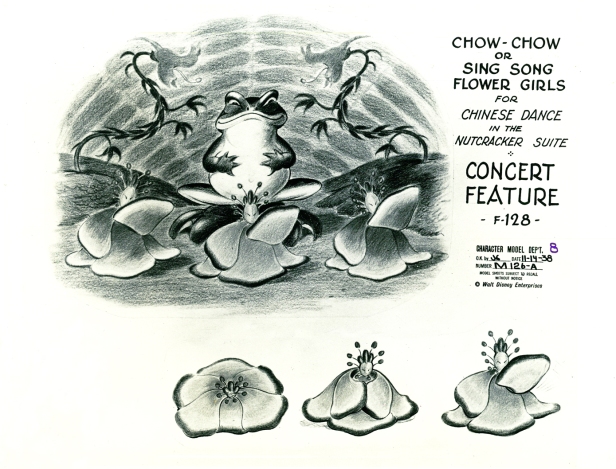 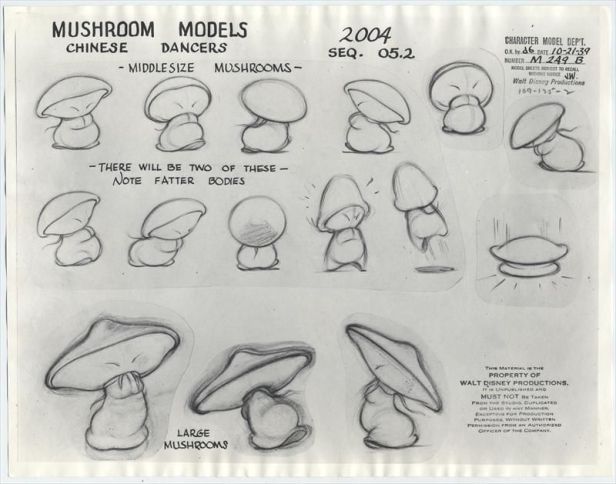 Walt’s instincts were on the money as usual as the sequence with the Chinese mushrooms is one of the most memorable scenes in the entire movie and usually elicits the strongest reaction out of audiences. The little mushroom (its name is Hop Low) constantly being out of sync with the bigger mushrooms as they moved in time with the music made for a loveable character despite the scene being only a minute long.

Animator Art Babbitt, who was the man responsible for giving Goofy his personality in the Disney shorts and bringing Snow White and the Seven Dwarfs’ evil queen and Geppetto the puppet maker from Pinocchio to life, embued the mushrooms with their personalities. Even taking inspiration for how they move from unexpected places. When the mushrooms do their rapid step in time to the trill of the music, Babbitt found inspiration from Larry, Moe and Curly of The Three Stooges.

Cy Young who was one of the main animators responsible for the abstract Toccata and Fugue segment was responsible for realizing Walt’s vision of flower blossoms spinning on the water like ballerinas in the “Dance of the Reed Flutes” number. Live-action dance models Joyce Coles and Marjorie Belcher (model for Snow White and Pinocchio’s Blue Fairy) wore the ballet skirts and provided the dancing that inspired the animation in this segment.

Don Lusk and his team of animators handled the mysterious and sultry goldfish in the “Arabian Dance” number. Taking inspiration from the harems of veiled concubines formerly of Muslim households which Walt referenced when describing what he envisioned, bringing to mind his experience watching travelogues of foreign countries where you saw actual harems (and the beautiful girls who would coyly peak out from behind the curtain before retreating inside). The animators did great work here, essentially succeeding at making a goldfish look sexy. This was the magnum opus of Don Lusk who would continue to work on all of Disney’s animated films from the 1940s to the 1970s. He would also later animate on Hanna-Barbera shows like The Jetsons and a ton of Charlie Brown specials. 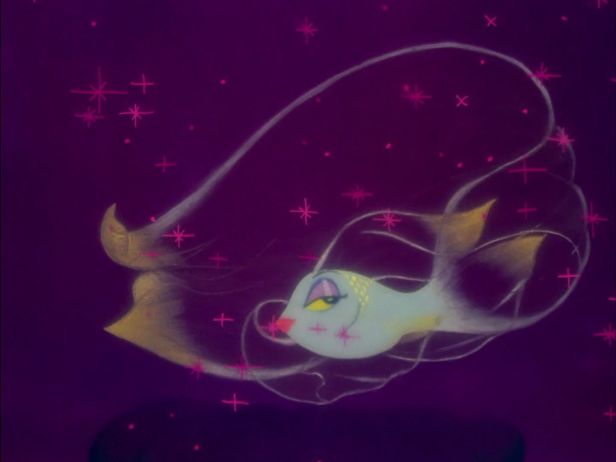 The models for the Russian cossack thistles in the “Russian Dance” number were actually growing in a parking lot near the Disney studio. After seeing the flowers, Walt envisioned them coming to life and found comic possibility in their stillness leading to a sudden and energetic dance of life, which the thistle men and the orchid women in this number start out performing separately and end up performing together. Art Babbitt’s stylish and masterful animation once again brings this segment to rich life.

The final number “Waltz of the Flowers” was inspired by Walt’s insistence that they devote some time in The Nutcracker Suite to the golden beauty of autumn in contrast with all the colorful aspects of nature we have been seeing up to that point. This of course leads to the return of the fairies who use their wands to turn nature from green to gold. And after autumn comes to an end we see the beginning of winter with frost fairies gliding through the air in their snowflake skirts and freezing water via some beautiful skating animation by Robert Stokes.

In fact beautiful animation is all over this piece with the falling leaves blowing in the wind in rhythm with the music and the milkweeds animated by Brad Case and George Rowley gently floating to the ground like ballerinas after being set free from their pods. Walt loved the idea of the feminine looking milkweeds and envisioned something similar to be animated for Bambi but found it too fantastical for that film. 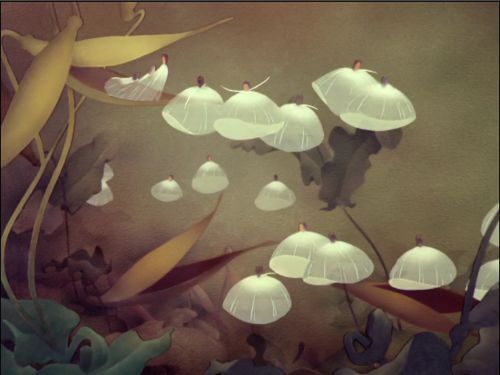 This entire segment is extremely well done and one of the biggest highlights of the film. Neither an abstract segment like Toccata and Fugue nor one that tells a story like The Sorcerer’s Apprentice, it simply takes us on a tour of mother nature and entertains us along the way in the most Disney way possible. You have seen Disney bring nature to life in many a Silly Symphony before but never with the confidence and skill that the studio’s animators bring to The Nutcracker Suite.