The first hardware model developed by Sega outside of arcades was the computer SC-3000. However, after learning about Nintendo’s plans to make a console, Sega also began developing the SG-1000, which was released in Japan in 1983 and was Sega’s first video game home console.

The SG-1000 was released at the same time as Nintendo’s Famicom (Nintendo Entertainment System in North America) and it suffered in comparison to Nintendo games like Super Mario Bros.

In 1984, Sega released the SG-1000 II which had some hardware tweaks and detachable controllers but was still not popular.

Finally Sega released the Mark III in 1985 and it was the ultimate upgraded version of the SG-1000. In 1986, Sega’s newly established U.S. division Sega of America marketed the Mark III in the States under the new name “Master System.”

The Sega Master System was largely unsuccessful in America, due in part by Nintendo’s exclusivity deal with third-party game developers, which was tough for other video game companies seeing as how Nintendo attracted the best talent in the industry. Master System however did better in Europe and other countries where Nintendo was not as popular.

Most importantly, there wasn’t a ton of great software for the Master System, although Alex Kidd in Miracle World (1986), Phantasy Star (1987) and Psycho Fox (1989) were pretty fun, and Phantasy Star was the first in what would become a popular role-playing game series that would go on for years. 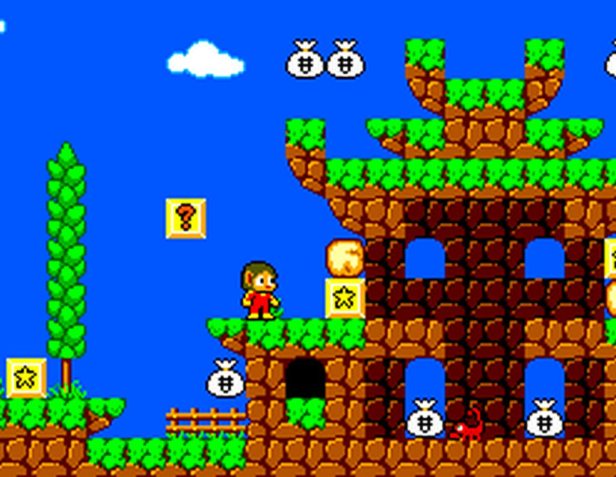 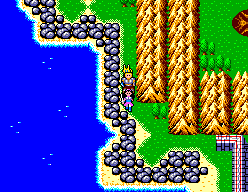 Unlike Game Boy, Game Gear was in full color and featured a backlit screen, but it had a shorter battery life and its software lineup could not compete with the likes of Game Boy titles like Tetris and Super Mario Land. It was actually possible to play Master System games on Game Gear using an accessory that converted the Master System’s cartridges onto the Game Gear screen, which was another way Sega tried to 1-up Nintendo, although a large part of the Game Gear’s lackluster library consisted of Master System ports.

Development of a successor to the Master System was immediate following that console’s lackluster success, and it was decided that the new system would implement Sega’s arcade system board into its architecture to have better graphical power than every other console on the market. The new 16-bit console would be called the Mega Drive and it was released in Japan in 1988.

At first the Mega Drive performed behind the Famicom and NEC’s PC Engine, but when the Mega Drive was released in North America under the name Sega Genesis, it began to take off in popularity.

Sega of America competed with Nintendo by aggressively going after Nintendo in its ad campaign (anyone remember the slogan “Genesis does what Nintendon’t”?) and Sega positioned the Genesis as the system that was more cool. This was actually an effective strategy in the nineties because in some ways the Genesis was more appealing than Nintendo’s 16-bit Super NES. For example, Nintendo was the more family-friendly game company, which meant that when Super NES and Genesis both ported an arcade game like Mortal Kombat, Nintendo would censor the game’s content and Sega would not, which was a score 1 for Sega in terms of coolness.

Another advantage Sega had was their deal with Electronic Arts, the developers behind the Madden NFL series which was the most popular series of sports video games ever. 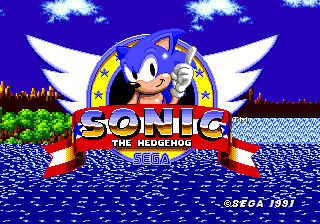 Of course many people credit Sonic the Hedgehog (1991) as the main reason for Sega overtaking Nintendo in that decade. This fast-paced platformer was by far the most fun series on Genesis and the first to seriously rival Nintendo’s Super Mario series. 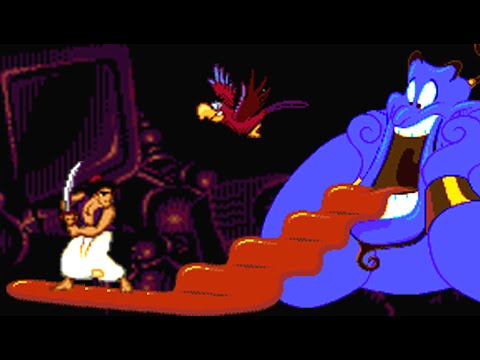 There was also a library of games that could be played on the Genesis using a CD-ROM add-on called the Sega CD and later another peripheral called 32X that would allow Genesis to play 32-bit games, but neither were popular because the software libraries for both devices were severely lacking in must-owns.

When the Saturn launched in Japan, one of their earliest titles was a port of Sega’s arcade hit Virtua Fighter which was the most crucial to the console’s initial success. In North America however, the Saturn could not compete with the popularity of Sony PlayStation. Japanese gamers loved Virtua Fighter but PlayStation owners were even more in love with Namco’s fighting game Tekken.

Not to say Sega Saturn did not have good games. The commercial failure of the system was more of a hardware issue than a software issue. Granted the Saturn games Bug! (1995) and Clockwork Knight (1995) were not the next Sonic the Hedgehog, no matter how much Sega wanted them to be, but much better were games like Panzer Dragoon (1995), Nights into Dreams (1996), Guardian Heroes (1996), Tomb Raider (1996), Grandia (1997) and Shining Force III (1997).

Another perceived contributing factor to Sega Saturn’s limited success was the lack of a flagship Sonic game. Seeing as how Sonic was so crucial to the success of the Genesis, this was curious, but the problem was that the Sonic game they were making for Saturn had development problems. It would have been called Sonic X-Treme but it got cancelled due to changes in the release deadline late in development forcing Sega’s programmers to work 20-hour days. After the project’s developers quit and got ill, the game was shelved, although head of Sonic Team Yuji Naka, who produced the Sonic games for Genesis, saw this as a relief because he did not think Sonic X-Treme was promising.

An all new 3D Sonic game would be put into development again soon afterwards, but the development would shift from Saturn to Sega’s next console. 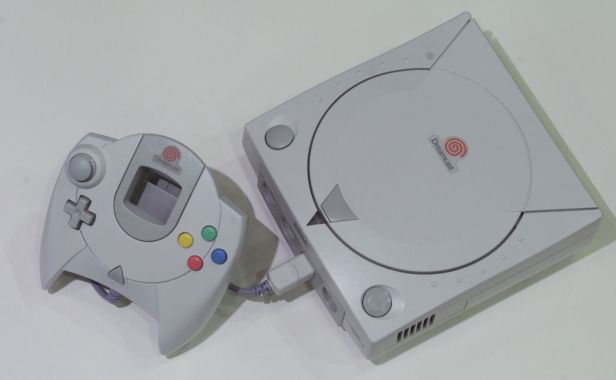 The Sega Dreamcast was superior to the Sega Saturn when it launched in Japan in 1998, and graphically it was superior to every other console. Most importantly, there would be a Sonic game released at the time of launch, which would end up being the fantastic Sonic Adventure which received acclaim from gamers and critics everywhere, although its release was delayed a little so it came out within weeks of the Dreamcast’s launch.

However the launch for Dreamcast would also be rocky for Sega as it sold below expectations with only Virtua Fighter 3 the popular launch title in Japan. Plus Sega’s perceived lack of competence as a hardware developer even led to Electronic Arts breaking ties with them as they refused to make games for Dreamcast. A hard blow for Sega since EA accounted for much of the success of Genesis. 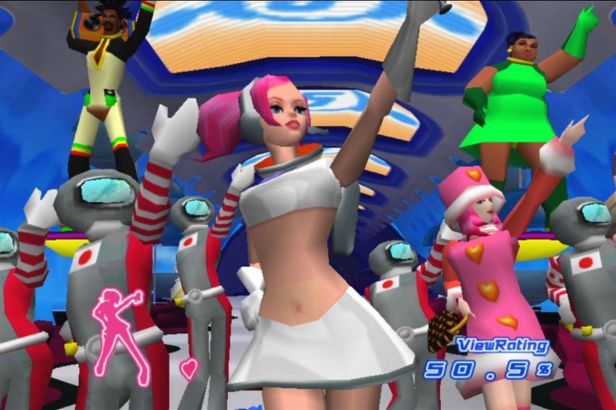 Unfortunately, beginning in the 2000s, Dreamcast was simply no match for PlayStation, and with Sony working on the PlayStation 2, Nintendo working on the GameCube and Microsoft entering the world of consoles with the Xbox, Sega’s future in hardware development was looking more and more challenging. The company would have likely gone bankrupt if it had poured more money into trying to compete with Sony, Nintendo and Microsoft on the console market, which is why in 2001, Sega announced the discontinuation of the Dreamcast and the restructuring of the company from a hardware developer to a third-party software developer that would make games for the other three big video game companies.

This decision initially shocked me because the idea of Sega making Sonic games for a Nintendo console is something I never thought I would see, but this was actually one of the best decisions the company made in a long time and it was met with enthusiasm from many gamers who liked Sega’s games but felt they held themselves back with inferior hardware. In fact, many Sega games from the nineties were rereleased on Nintendo and Sony consoles and finally received the audience they deserved. 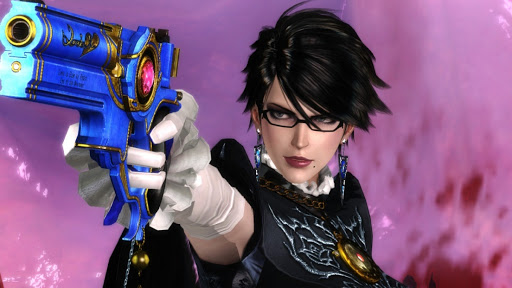 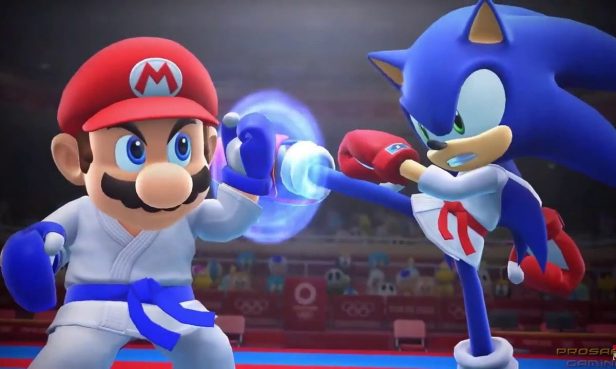 Sega continued to publish and develop many great games in the 21st century such as Super Monkey Ball (2001), Yakuza (2005), Valkyria Chronicles (2008), Bayonetta (2009) and fantastic Sonic games like Sonic Advance (2001), Sonic Rush (2005) and Sonic Mania (2017). Sonic even started appearing in a few Nintendo games and seemingly has put his rivalry with Mario behind him.

Even though Sega is now doing what Sega should have always done (focus on creating great games and leave hardware development to others), I am glad Sega aimed for the stars with console development because their success with Genesis proved that Nintendo was not invincible and they paved the way for PlayStation and Xbox to take over by proving that there was room in the market for more than just a Nintendo console.

In the nineties, Sega saw Nintendo as its rival but it was not actually Nintendo who defeated Sega. That would be PlayStation. For all of Sega’s bragging as the cool alternative to Nintendo, PlayStation was the console in the nineties who lured away all of Nintendo’s third-party development partners so that PlayStation games like Castlevania: Symphony of the Night, Metal Gear Solid (both made by Konami), and Final Fantasy VII (Square Enix) could help make Sony the king of gaming. But Nintendo survived because they are one of the best video game developers in the world. Something Sega continually failed to prove for themselves.

Although largely ignored Sega Saturn games like Nights into Dreams might have helped improve Sega’s reputation in the nineties more if they had been released on the PlayStation or Nintendo 64 instead.