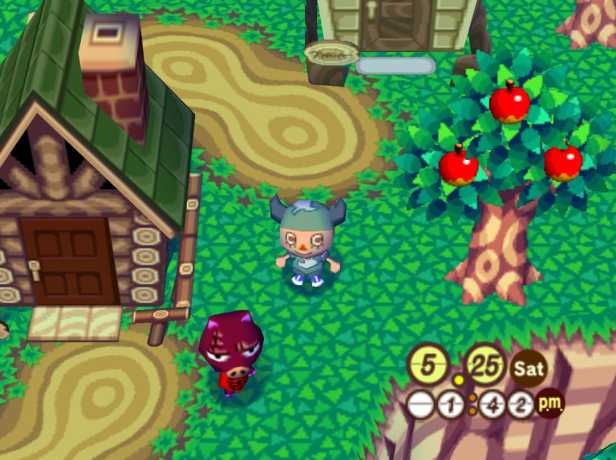 At the turn of the 21st century, the big hit life simulation game was Will Wright’s The Sims, but I was not a PC gamer in the 2000s. I was a Nintendo kid. So I was not playing The Sims on the computer. I was playing Animal Crossing on the Nintendo GameCube.

While me and my brothers were much more interested in action-oriented adventure games like Mario, Zelda and Pokémon, the game our sister played was this little life-sim game about a human who moved to a village filled with talking animals that had no beginning and no end, and this was my introduction to the simulation genre.

Turned out the more we watched our sister play it, the more we wanted to play it too. It looked incredibly fun. Plus the game allowed four different players to live in one village so everyone in my family could play the game and live in our own individual houses.

There were countless activities in this game. You could visit each other’s houses, do tasks for your neighbors, send each other mail, earn money, buy your own house, buy furniture, wallpaper and flooring to decorate your house, wear different clothes, design your own clothes, plant flowers and trees, chop down trees, pick fruit, dig up and bury things, catch fish with fishing rods, catch insects with nets, and even hop on a train to visit other villages that people created on other GameCube memory cards by having two memory cards inserted in your GameCube at the same time.

The most mind-blowing feature of the game however was its real-time clock. The game utilized the GameCube’s built-in clock, which meant as hours passed in real life, it went from day to night in the game at the same time. Stores within the game closed at night, and when you planted a tree, it literally took three days to grow into a full-sized tree.

Certain things could only be accomplished at certain hours of the day, days of the week, and seasons of the year. For example, if your birthday came around, your animal neighbors would wish you a happy birthday and even give you presents. And weather would change too. When it snowed in the winter time, you could build a snowman.

Plus, every Saturday at 8pm the guitar-playing K.K. Slider would perform in front of the train station (he even takes requests!)

The passage of time also effected which fish and insects you were able to catch. 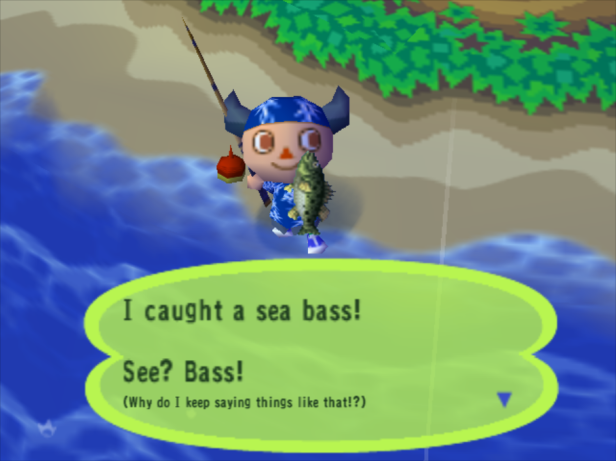 Not to mention you could take part in a variety of annual events, and celebrate several festivals and holidays each month. All this meant that you could literally play this game for a year and never get bored.

And no two copies of the game were the same. You could name your character and your home town, and every village looked different and had a different set of animal villagers. And as the series progresses from console to console, you get more control over the creation of your character, not only in terms of their gender but in terms of their hair style and skin color. 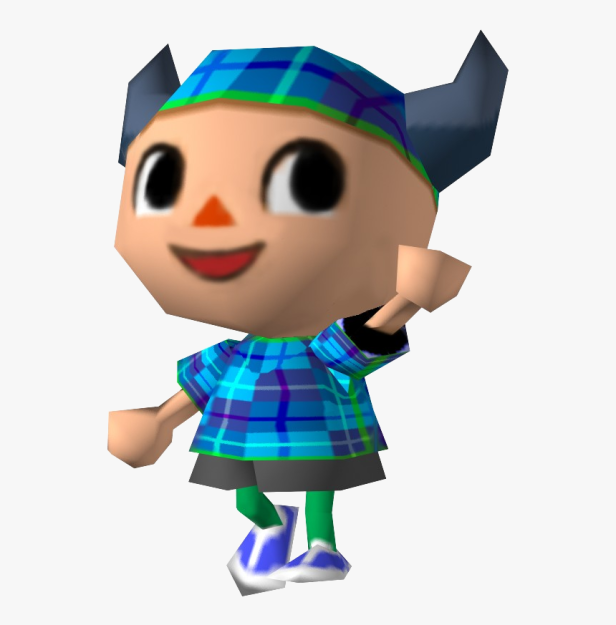 Among the memorable and hilarious cast of animal characters in this game are storekeep and landlord Tom Nook the raccoon who you spend most of the game paying off your debt to, Mayor Tortimer the tortoise, Blathers the owl who curates the museum, the Able Sisters, two porcupines who sell and design clothes, Copper the police dog who runs the lost-and-found, Gracie the fashionista giraffe, Crazy Redd the shady fox who sells items on the black market, Kapp’n the sea-faring turtle, Gulliver the washed-up seagull and many, many others. 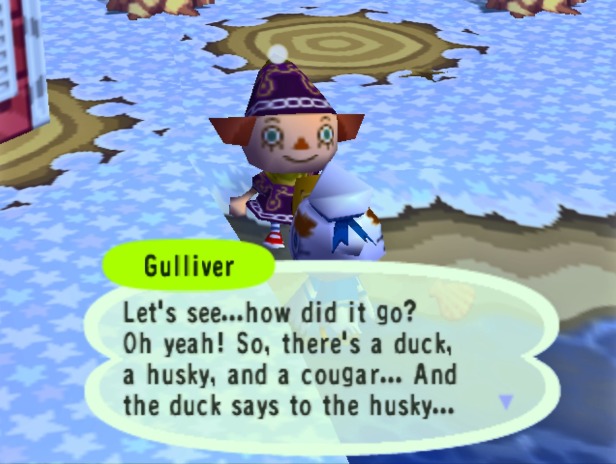 My favorite is Mr. Resetti the short-tempered mole who chastises you every time you reset or turn off the game without saving because it hurts the game’s realism.

The origin of the game began with Katsuya Eguchi, a Japanese game designer who helped design Super Mario Bros. 3 for the NES and Yoshi’s Story for Nintendo 64, in addition to directing the groundbreaking SNES flight shooter Star Fox and the N64 racing game Wave Race 64. 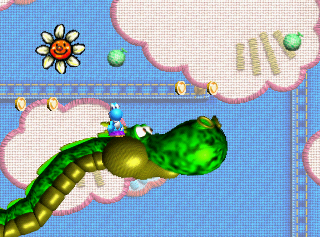 Animal Crossing was inspired by Eguchi’s lonely experience moving to Kyoto and leaving his friends and family behind to move to a new town by himself.

He also said that the idea of allowing four different players to live in one village was inspired by a tendency in his family to play games separately. When Eguchi came home, sometimes family members would already be playing games without him, and Eguchi thought it would be fun to bring families closer together by letting them do things in a game that other family members could see when they played next. Even though they all played at different times, they were all still living together in the same game world. I shared the game with my family and it was definitely a unique and fun experience seeing things my family did while I was away.

Animal Crossing for GameCube was actually not the first game in the series despite the fact that it was the first to be released in America. Nintendo first started working on a game in the nineties called Dōbutsu no Mori (translated to Animal Forest) to utilize the technology of the upcoming N64 peripheral the 64DD (“DD” standing for “Disk Drive”) which attached to the N64 console and allowed the cartridge-based system to play disks.

The 64DD was released in Japan in 1999 and allowed a 64 MB data expansion and for the first time in Nintendo’s history a real-time clock. Although due to constant delays to the 64DD’s release date, Animal Forest was eventually shifted to the game cartridge medium, becoming the only N64 Game Pak to contain a real-time clock. It was released for the N64 in 2001, the last Nintendo game to be released for that console.

2001 was also the year that the Nintendo GameCube came out, so Nintendo decided to port Animal Forest to that system under the name Animal Forest+, containing extra features and utilizing the real-time clock inside the GameCube.

When Nintendo decided to localize Animal Forest+ for North America under the new name Animal Crossing, the translation job was huge, not only in terms of dialogue text but in terms of changing the holidays celebrated and the items you can obtain in order to appeal to players outside of Japan.

When Animal Crossing was released it received critical acclaim and was a huge commercial success, becoming one of the best-selling GameCube games and eventually one of Nintendo’s biggest franchises.

Its success led to a handheld Nintendo DS sequel in 2005 called Animal Crossing: Wild World, which was the first Animal Crossing game to use Wi-Fi. It required each player to share one house instead of live separately and introduced new characters, new events and new items like the slingshot.

Animal Crossing: City Folk was released for Wii in 2008 and expanded the world to include the big city and separated players once again to live in separate houses spread apart from each other, as opposed to all in the same plaza like in the first game. 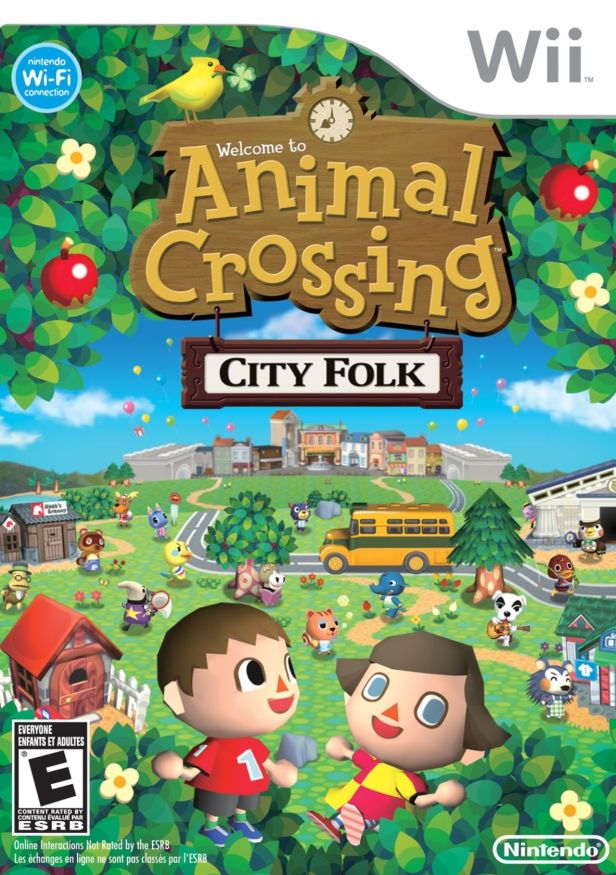 Animal Crossing: New Leaf was released for Nintendo 3DS in 2012 and required you to be the mayor instead of the retired Tortimer, giving you more control over your town than in previous games as your canine assistant Isabelle helps you in your mayoral duties. In addition, Tom Nook is a real estate agent and no longer a shopkeep as he now lets his nephews Timmy and Tommy run the town shop.

The newest game in the series Animal Crossing: New Horizons came out for the Nintendo Switch in 2020 and not only uses a real-time clock but uses real-world location detection to effect the game’s weather, which for the first time can include wind. In this game you are given your own island which you can decorate, customize and eventually expand, and you can also visit the islands of other Switch owners via local and online co-op gameplay by flying Dodo Airlines.

Katsuya Eguchi said the three themes of all these games are family, friendship and community and he hopes to promote those values through this series. It’s fun to use video games to visit other worlds but it’s even better when you can learn things from video games that you can apply to the real world.

I for one learned that if you rescue a shipwrecked seagull, he might reward you with a souvenir. Something I will be sure to keep in mind next time I go to the beach.

One thought on “Animal Crossing: Creating a Community”