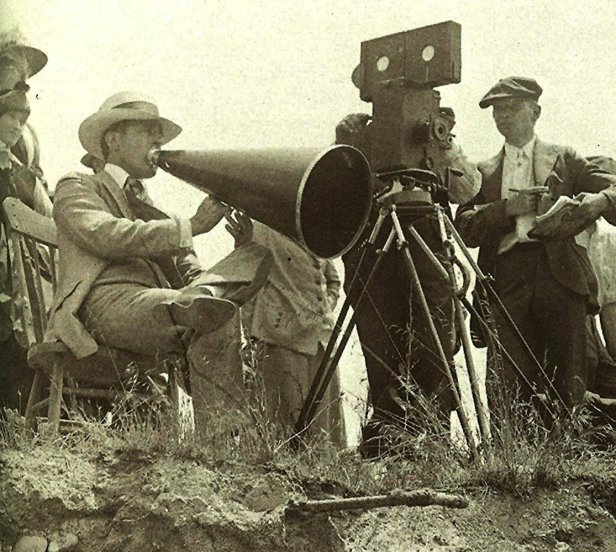 The term “feature” was first used in the film industry to describe any multiple-reel film, but it soon came to mean any film that was at least one hour long (four reels at silent speed).

The first ever feature film on record was made in Australia in 1906: The Story of the Kelly Gang, which was directed by Charles Tait and told the story of real life outlaw Ned Kelly.

However, one of the most important early features was Universal’s Traffic in Souls (1913) directed by George Loane Tucker. This scandalous film was about the prostitution racket, and Tucker directed it without Universal founder Carl Laemmle’s approval. This was the film that inspired D.W. Griffith.

David Wark Griffith started out as a playwright who had very little success selling plays. He made end’s meet working as an actor on stage and in film where he worked for Edwin S. Porter of The Great Train Robbery fame, but he still wanted to tell his own stories.

That was where film company Biograph came in. Griffith was hired by Biograph to make one-reelers and he directed over 450 films for the company between 1908 and 1913.

Griffith was the most ambitious filmmaker in the business and he often felt constrained by the limitations of one-reel short films. Griffith’s films were the most artistically creative of the 1900s. He was the most effective with close-ups, long shots, etc. He established a modern standard in the way he combined all of his film techniques.

Griffith was also the first filmmaker to rehearse, the first director to build a company ensemble of actors (which included Mary Pickford, Lionel Barrymore and sisters Lillian and Dorothy Gish), and the first film director who portrayed women characters as clever and strong.

His films evoked his 19th century background and all the novels, plays and paintings that come with it. Griffith made films about American history, films about poverty, films based on classic literature, films about life in rural America, and religious morality tales about Satan, sensual pleasure vs. home life, and the clash of basic human goodness and the harsh realities of human existence.

D.W. Griffith was cinema’s first master storyteller, and because of Griffith, Biograph films were the best films on the market.

One time Griffith’s ambition got the better of him when he made a two-reeler called Enoch Arden (1911) based on the poem by Tennyson and The General Film Company insisted on releasing it in two parts, until shortly afterwards when the two reels were released side-by-side due to popular demand, which was the first sign that audiences preferred feature films over short films.

Griffith’s films were also the most expensive, but it was a fool’s errand to try to restrain Griffith’s awesome creativity. The final straw came, however, when Biograph tried to cut expenses by making Griffith director of studio production instead of films, which caused him to leave Biograph in 1913 for an independent company called Mutual/Reliance-Majestic (the production company was Reliance-Majestic and the distributor was Mutual).

When Griffith went to California to work for Mutual, he took his cinematographer, his entire stock company, and took out a full-page ad in the New York Dramatic Mirror identifying himself as the director of “all great Biograph successes,” which was the first time a director took credit for the success of a film studio. Not modest but not entirely untrue, Griffith also credited himself with “revolutionizing motion picture drama and founding the modern technique of the art.”

Griffith shot four features during his first year with Mutual (1914):

The Battle of the Sexes

It was his feature films from 1915 and 1916, however, which would turn Griffith into a cinematic legend.

In my next blog, I discuss those two films and I discuss how Griffith’s film career ended.