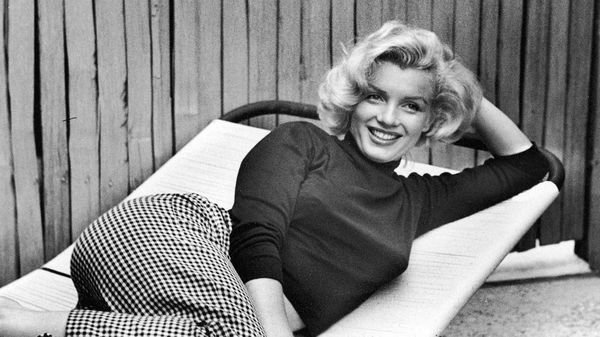 We often fantasize about being famous movie stars. Hollywood seems like a glamourous place where dreams come true. But something the public doesn’t often think about is the huge psychological toll being famous can have, and no one has suffered from this more than Marilyn Monroe.

Monroe was the biggest star of the fifties and is still seen as the ultimate sex symbol in American pop culture. Even I have not escaped her allure. In my mind she is objectively the most attractive Hollywood celebrity. I even own a shirt with her picture on it!

This was, of course, the goal of 20th Century Fox: to create the ultimate blonde bombshell so that heterosexual men like me would be attracted to her and follow her into the cinema with their wallets, and it worked!

But Marilyn Monroe was still a human being, and not a dumb blonde like the one Fox often forced her to portray. She was intelligent, navigated the studio system cleverly, knew how to get attention to help her gain popularity, refused to act in terrible films, walked out on Fox because they refused to give her a proper paycheck, and took acting completely seriously.

The legend that she was fragile and difficult to work with is also unfair, especially since the way Fox relentlessly tormented her would make any human being on the planet riddled with anxiety.

There was nothing wrong with Marilyn Monroe. The problem was Hollywood.

Born as Norma Jeane Mortenson in Los Angeles in 1926, she was finally discovered by a photographer in 1944 while working in a radioplane factory for the war effort, and became a popular pin-up model.

Of course in Hollywood, there are no such things as long-term deals. She only lasted a year at the studio before they dropped her, such was the assembly-line approach to mining for stars.

Neither Columbia, MGM nor United Artists would offer her a contract after working with her on such films as Ladies of the Chorus and The Asphalt Jungle, but after she was asked to make a short but sexy cameo in All About Eve, Fox production chief Darryl F. Zanuck offered her another contract, and it was at this point that Monroe became a star, usually in bit parts for lightweight comedies.

For one thing, Monroe was the biggest star of the fifties, becoming the top box-office attraction by 1954, but Zanuck kept her bound by her original contract well into her rising fame, freezing her salary at $1,500 a week. Not a bad pay day for you and me, but to a Hollywood star this was insulting.

In an act of retaliation, she left L.A. for New York to start her own production company while still under contract with Fox. This soured her relationship with Zanuck, but after The Seven Year Itch became a box-office success, the 20th Century Fox board of directors put pressure on Zanuck to raise her salary to $100,000 a film and give in to her demands so that she wouldn’t leave the company and go independent. This price was still significantly lower than the money Fox was paying their other stars (Elizabeth Taylor got $1 million), but Monroe settled.

Both Monroe and Zanuck never really got over this rocky period, Zanuck seeing Monroe as a traitor and Monroe seeing Zanuck as someone who refused to take her seriously. And if you think this was bad, it’s nothing compared to what happened in the sixties.

Marilyn longed for the multi-million dollar deals other studios were offering her, but Fox threatened her with legal action if she tried to get out of her contract, forcing her to star in a movie she did not want to make called Something’s Got to Give (a movie that was notorious for never getting finished, and for being the last film Monroe worked on).

There was nothing noteworthy about the script. It was just another movie that likely would have come and gone, but the more famous Monroe got, the more she seemed to recoil from the camera. It wasn’t just that she was shy – she would get panicky.

Directors like John Huston and George Cukor had dealt with her anxiety on set before. When Some Like It Hot director Billy Wilder hired an analyst to cure her nerves, the analyst came to a simple conclusion: the reason why Monroe was so uncomfortable was because she did not want to be a movie star anymore.

As a film historian, I can say without question that this was true… sort of. She certainly did not want to work for Fox anymore. Whether she wanted to quit the movie business completely was something only she knew, but she obviously did not feel this way all the time, or she wouldn’t have worked so hard to become a star.

But this did not matter now. These days she longed for obscurity. Monroe’s refuge from the eyes of the public had been her hidden home in the suburbs where people like Joe DiMaggio, Frank Sinatra and Bobby Kennedy could visit her without a commotion from the paparazzi.

In addition to the lame scripts she was being offered, Monroe was also starting to grow tired of being Marilyn Monroe. The physical and psychological rigors of transforming into a flawless and sexy bombshell were too much for her to handle.

Then there was the pressure of working for a studio on the verge of bankruptcy. After Fox spent all its money on the disastrous Liz Taylor vehicle Cleopatra, the Fox lot was sold for real estate. The studio was a far cry from its prestige in the 1940s when Monroe first joined the studio.

Greedy movie executives were killing their own studios, and they were dragging Monroe down with them. Monroe was Fox’s only remaining star, possibly the girl who could save Fox from bankruptcy if Something’s Got to Give was successful.

Fox monitored her constantly and put enormous pressure on her. Monroe remained professional on the set but you could tell she was suffering on the inside.

At one point she became too ill to continue filming, but against medical advice, Fox started production anyway, even alleging she was faking it. But Monroe finally had to go on sick leave, causing the film to run behind schedule, something Fox could not afford to do lest they repeat another Cleopatra-like debacle.

Fox finally cancelled Something’s Got to Give, even blaming Monroe for the production problems calling her mentally disturbed.

Monroe seemed to be ready to move on with her career after the whole episode, even giving magazine interviews to restore her image after Fox tried to damage it, but that was until August 5, 1962.

Marilyn Monroe was found dead by her housekeeper and psychiatrist in her hidden suburban hideaway in Brentwood, suicide from a drug overdose, the drug being barbiturates, a nerve depressant with potentially addictive side effects.

Underappreciated, not taken seriously by her own employers, and as Laurence Olivier put it, “the complete victim of ballyhoo and sensation,” Marilyn Monroe was the ultimate Hollywood tragedy. She is a poster child for the dangers of being famous.

The scariest thing about Monroe’s downfall was the fact that she started out as a simple girl who loved movies and dreamed of stardom, which describes so many people. Oftentimes it describes our own friends and family members.

I don’t pretend to know exactly why Monroe committed suicide, but here’s what we do know: she was not mentally ill, and she clearly killed herself on purpose because the overdose was too lethal to be ruled as anything but suicidal.

My guess is that living became too exhausting and that suicide seemed like an easy way out. After putting up with public scrutiny, abuse, sexual harassment, greedy executives, and the exhaustion of making films and maintaining a persona, the glamour of Hollywood may have faded and she may have felt stuck in an industry that once felt like her family but no longer held any appeal. I would be surprised if anyone could maintain their humanity under these conditions. Maybe she realized she couldn’t, and maybe that’s why she died.