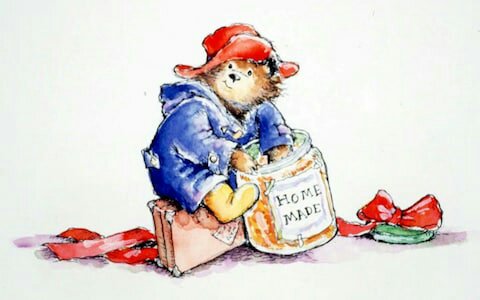 And now the history of the little bear in the red hat and blue raincoat who loves marmalade and hails from Darkest Peru.

English author Michael Bond first created the character of Paddington after seeing a lone teddy bear on a shelf in a London store near Paddington Station on Christmas Eve 1956. After buying the teddy bear as a present for his wife, he wrote a story about a bear who is sent to live in London by his Aunt Lucy and is taken in by the Brown family (a family of humans) after they discover a note that reads “Please look after this bear. Thank you.” The Brown family named the bear Paddington (they couldn’t understand his Peruvian name) and with this family Paddington has remained for decades.

Most of these stories, the first one being A Bear Called Paddington in 1958, were illustrated by Peggy Fortnum and were divided by stand-alone chapters.

The stories usually revolved around the well-meaning Paddington getting into predicaments and trying to get himself out of them while oftentimes making things worse, but the endings are usually happy (except when it comes to Mr. Curry, the Browns’ next-door neighbor).

Bond continued to write Paddington stories until his death in 2017. 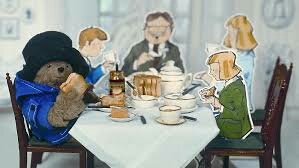 The first time the character had been adapted to film was in 1976 when the BBC produced 56 stop-motion animated short episodes scripted by Bond himself and narrated by Shakespearean stage actor Michael Hordern. The character of Paddington was a dimensional puppet but all the other characters were paper cut-outs (Paddington was the star, after all). Americans saw these shorts on PBS, Nickelodeon, The Disney Channel and HBO, mostly as interstitial segments in between the main programs.

This animated series was amusing and clever, the highlight being the scene from the 21-minute special episode Paddington Goes to the Movies (1983) in which Paddington faithfully recreates Gene Kelly’s dance number from Singin’ In the Rain. 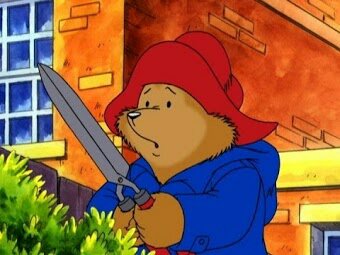 Paddington was adapted unsuccessfully a few more times in a syndicated 1989 series by Hanna-Barbera in which Paddington was voiced by Charlie Adler and Mr. Curry was voiced by… wait for it… Tim Curry. That show lasted 13 episodes.

Paddington was also adapted in 1997 by Canadian children’s television company CINAR (now known as Cookie Jar) and French company Protécréa, a division of French distributor TF1, in an international co-production that lasted only 39 episodes. That show was called The Adventures of Paddington Bear, and aired on Canadian TV network Teletoon and the British ITV but was nothing special. 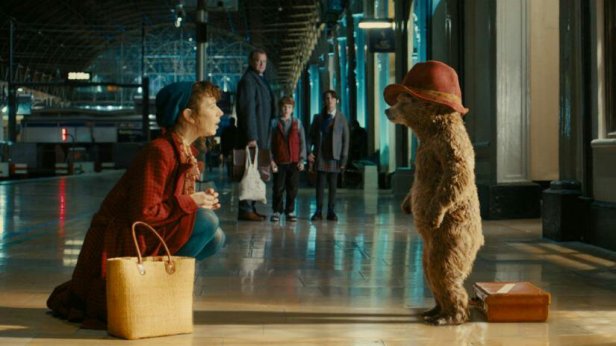 The best adaptation by far has been the 2014 live-action/CGI U.K. film from StudioCanal directed by Paul King and starring Ben Wishaw as the voice of Paddington. The film also starred Hugh Bonneville, Sally Hawkins, Julie Walters, Jim Broadbent, and Peter Capaldi as the humans, all brilliantly brought to life from the books. It was released to critical acclaim and box office success and has led to a sequel in 2017 featuring newcomers Hugh Grant and Brandan Gleeson and by the looks of reviews is just as good as the first film.

Paddington 3 is already said to be in the works, and so is a new animated television series set to be released in either late 2018 or early 2019. No matter where this bear’s newfound cinematic fame may take him, may he stay in our hearts and minds and remain true to the vision of his creator the late Michael Bond. 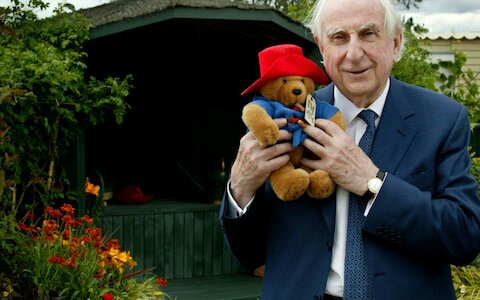 2 thoughts on “Paddington Through the Ages”