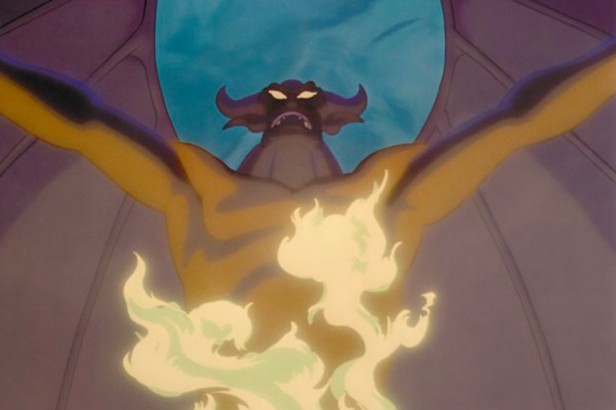 This segment depicts Bald Mountain, a location in Slavonic mythology where evil spirits are said to gather on Walpurgis Night (the equivalent of Halloween) to worship the devil. As the Slavic god Chernabog (Latin for “Black God”) rises from the top of the mountain, the sabbath begins as he summons the spirits of the dead. But it is stopped as the church bells of dawn begin ringing and drive Chernabog and the demons back to rest, which leads to the beginning notes of Schubert’s “Ave Maria” and a procession of figures marching while holding candles through the fog, over a bridge and past a forest of tall trees that bring to mind the hall of a cathedral as we are taken through the tunnel of trees and shown the morning sky as it brightens with the light of dawn and with it, hope that good will ultimately triumph over evil.

The animator who Walt Disney chose to personify the god of evil was his greatest animator on hire at the time Bill Tytla, the animator who memorably brought characters like Grumpy (Snow White and the Seven Dwarfs), Stromboli (Pinocchio) and the giant who menaces Mickey Mouse in The Brave Little Tailor to forceful life. Not to mention Tytla was of Ukranian descent and totally familiar with the folklore of Chernabog.

The visualization of Disney’s version of Chernabog and the idea to put him atop a mountain originated from an artist named Albert Hurter who Walt hired to inspire his own artists, while myth and fairy tale illustrator Kay Nielsen designed the witch’s sabbath. 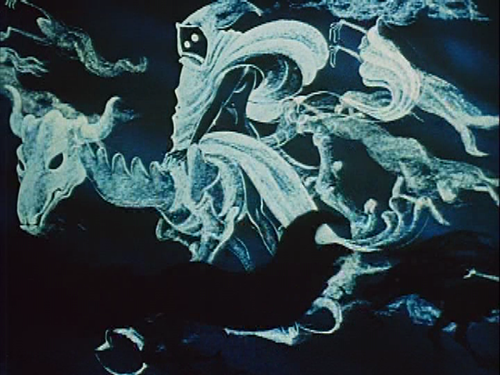 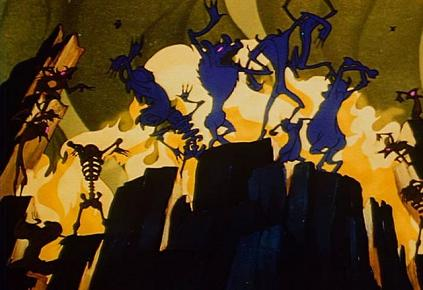 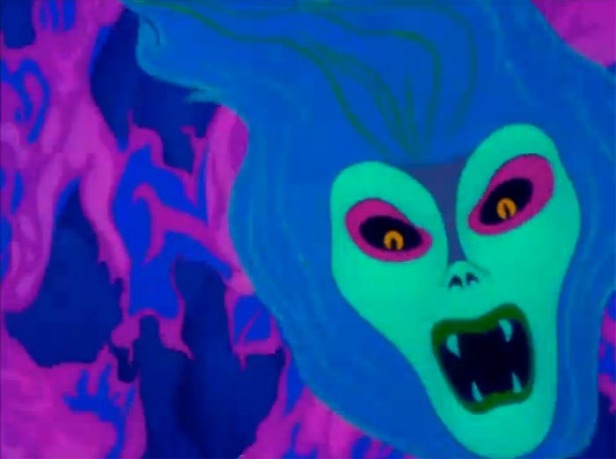 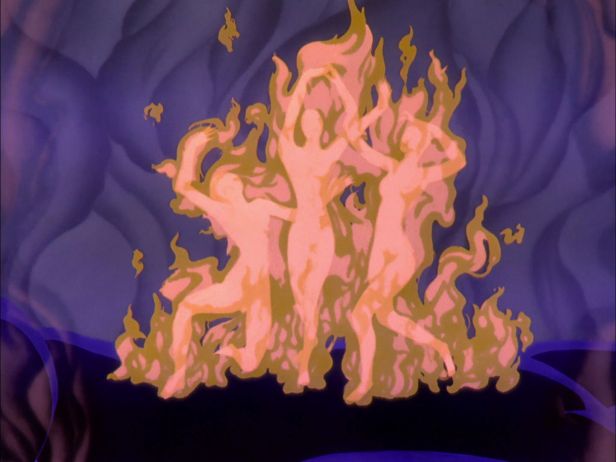 Wilfred Jackson, director of the Mickey Mouse cartoon The Band Concert and The Old Mill, was chosen to direct this segment and he also served as the shirtless reference model for Tytla as he animated Chernabog’s anatomy in motion. The effect makes Chernabog a tour de force of animation who felt physically more human than any previous animated character. It remained Tytla’s masterpiece for the rest of his career.

Walt was adamant that Night on Bald Mountain be more than just another Skeleton Dance (a reference to his very first Silly Symphony in 1929). He wanted to achieve something that the studio never achieved before, and they succeeded. Disney was known for making films with strong emotional resonance but nothing they made up to this point matched the chilling sight of a winged Satan atop a mountain summoning souls from the grave.

Despite how bone-chilling Night on Bald Mountain is, some people at the studio felt more nervous about the segment following it. Ave Maria is four minutes long and contains very little animation. The marching of pilgrims in the distance holding candles is actually a pretty bold way to end the picture since it is the most somber and still of all the sequences in the movie, but Walt saw it as the perfect relief following the Bald Mountain sequence and argued that the movie was non-stop action up to that point and four minutes of non-action will not ruin the film.

Deems Taylor described the procession of pilgrims as worshippers of the God of Light, which was meant to be in contrast with the worshippers of darkness on Bald Mountain, and indeed it was the perfect counterpart to the exploits of Chernabog.

The decision to make Ave Maria a showcase for the background painters rather than the animators and to evoke feelings of hope through Schubert’s music that bordered on religious was the ultimate statement by Walt about how he thought animation could be more than what the industry perceives it as. Walt was an experimenter and a risk taker who disliked repeating himself. If he wasn’t on the frontier of something new, he didn’t see the point. It’s one of the reasons why he focused more on theme parks than animation in the fifties. This segment signified more than any film his ambition for animation to be seen as an artform worthy of respect.

Even though from a viewer’s perspective the Ave Maria sequence in Fantasia looks like the most simple to create, behind the scenes it was far from simple.

For one thing, animating slow-moving silhouettes in the distance is not as easy as you might think. The smallest inconsistency in the sequence of frames could cause the animation to jitter, and by the way they are also holding candles, so the light had to move believably too. In fact the animation did jitter when the scene was first shown to Walt and he refused to use it until it was perfected.

Disney’s artists started over working on the sequence just weeks before Fantasia’s premiere date. One of the technical problems was making the camera go slowly for a long period of time across the 215 feet of film the final shot took up. Using the skills of an artist, some inventors and some carpenters, the filmmakers figured out a complex process which involved a horizontal camera crane and panes of glass mounted on moveable stands which could be shifted as the camera panned through the trees in the forest.

When they finished filming, the animation was beautiful and did not wobble or jerk, but it was still unusable because the filmmakers used the wrong lens, resulting in camera tracks, art stands and even a few workers being accidentally photographed in addition to the artwork.

This meant that the crew had to start over with only days away until Fantasia’s premiere.

With caffeine to keep them awake and a determination to give Walt what he wanted, the retake was going smoothly…until an earthquake hit during filming (damn you California!) and shook the stands holding the glass containing the artwork, but thankfully none of the glass broke or even cracked. The equipment seemed to be fine after the earthquake but it was not the ideal circumstance when your goal is to PREVENT jittering.

They started over (again!) the following morning, put in new film, double-checked the camera lens, finished filming with one day to spare and rushed the film to the lab to be processed and it came out perfectly (the plane holding the film arrived at the airport hours before the premiere, which went off without a hitch).

Almost miraculous that the film got finished in time, which makes it sting somewhat when you think about how it was not a financial success when it first came out. The stereoscopic sound system Fantasound, the idea of an animated concert film and many other things about the film were too radically different for filmgoers in the forties, but the film is a classic now and over time many animation fans and filmgoers have come to appreciate the unique concept and high-caliber artistry behind it. The fact that Walt Disney came up with the idea for the film and never once lost enthusiasm for it speaks to how much of a visionary he was.