I hold animators in high regard because they are the most talented and hardest working artists in the film industry. I can name dozens of animators who I love, so when I say it is an easy choice that Eric Goldberg is my favorite of all time, that is a testament to his outstanding work. Just like Ward Kimball, Goldberg was a Disney animator with a style that was easily identifiable among his peers, and that may have been because unlike other Disney animators, he was already a successful and fully developed animator before the studio hired him.

He majored in illustration at Pratt Institute in New York and entered the animation industry in the seventies initially with an eye on working at Disney. Disney animator Eric Larson, who animated characters like Figaro and Friend Owl back in animation’s golden age, opened the animation training unit and liked Eric Goldberg’s work, but the powers that be rejected him. It was assumed that his distinct art style was too different from what Disney wanted at that time, and this comes as no surprise if you’ve ever seen his work.

Thankfully Richard Williams was hiring people to work with him over in London and Goldberg was brought in to work on the 1977 film Raggedy Ann and Andy: A Musical Adventure as an assistant animator. It is not a great film but it is a significant one in Goldberg’s career.

He learned from experienced animators like Art Babbitt and Ken Harris and rose through the ranks at the Richard Williams studio quickly, which led to Goldberg starting his own animation studio in London called Pizazz Pictures which mainly produced and animated television commercials.

All the while, Eric Goldberg had a friendly relationship with some of the animators at Disney, including John Musker who Goldberg met because Goldberg’s wife and artistic collaborator Susan Goldberg went to CalArts with Musker. When John Musker and Ron Clements were chosen to direct the 1992 Disney film Aladdin, they both thought Goldberg would be perfect for Genie. Thankfully, that was the character Goldberg was hoping he would get.

Goldberg was the first animator who worked on Aladdin, and his work set the tone. All the characters, including the realistic characters like Aladdin and Jasmine, were designed to feel like they belonged in the same world as Genie, and the filmmakers achieved this well. Al Hirschfeld’s drawing style was a major influence on Goldberg and the look of the film, and one of the best compliments came from Hirschfeld himself when he said that the movie looked like it was all drawn by the same person.

Goldberg was the supervising animator of Genie, and his work on the character remains the most memorable part of Aladdin and a big part of the reason why I became such a huge fan of both Eric Goldberg and actor Robin Williams, not to mention the film itself, which remains a pinnacle of the animation medium.

Goldberg’s fast and funny animation was already refined to a certain extent before he was assigned the Genie thanks to his experience making 30-second commercials, which had brisk paces and needed to communicate information in a sharp and clear way. In a way, Goldberg had a sensibility that was more in line with Tex Avery and Chuck Jones than Walt Disney, but the stars alligned in 1990 when Disney started getting more comfortable being adventurous with their art style. Although as Goldberg stated, his favorite animators are actually the Disney animators Fred Moore and Ward Kimball, and his work in Aladdin can arguably be seen as a throwback more than a radical departure for the studio.

The success of Aladdin made Disney want to keep Goldberg around, and they did. He co-directed the 1995 musical Pocahontas with Mike Gabriel and was hired by John Musker and Ron Clements to supervise the animation on Phil in the 1997 musical Hercules, which was influenced by the art style of Gerald Scarfe and was a great showcase for some more wacky brilliance from Goldberg.

While I loved Goldberg’s work on Phil, his greatest work since Aladdin, which has yet to be topped, is his work on Fantasia 2000, which contained work that was much more in line with his sensibilities than Pocahontas.

Speaking of which, the Carnival of the Animals, Finale segment (featuring a flamingo with a yo-yo) re-teamed Goldberg with his Pocahontas collaborator Joe Grant, the man who had been working at Disney since the days of Snow White and came up with the idea for the segment when he drew an ostrich playing with a yo-yo. Goldberg turned it into one of the best segments in the film with another appealingly cartoony animation style.

Although my favorite segment of any Fantasia film is the one that wasn’t even originally intended as a segment in Fantasia. Much like The Sorcerer’s Apprentice, Rhapsody in Blue was a creative experiment in music and animation that found its way into Fantasia.

As I’ve stated, Eric Goldberg was hugely influenced by Al Hirschfeld, and you can see it in his animation and even in Hirschfeld’s artwork.

Rhapsody in Blue was Goldberg’s way of paying homage to Hirschfeld in the field of animation, and the segment was easily the most creative of all the segments in Fantasia 2000. It was one of the rare modern animated films thst lived up to Walt Disney’s standards alongside Beauty and the Beast and The Lion King.

Eric Goldberg was mostly MIA from Disney in the 2000s until he was hired as a supervising animator on a couple of hand-drawn animated films, the first being The Princess and the Frog (2009) where he animated Louis the alligator and the next being Winnie the Pooh (2011) in which he did some hilarious animation for Rabbit.

But as Disney has moved away from hand-drawn animation, the cartoony style of Eric Goldberg has mostly gone to waste, although he is usually one of the go-to guys when the studio makes the rare venture towards traditional animation, such as in the Goofy cartoon How to Hook Up Your Home Theater which played in front of National Treasure: Book of Secrets in 2007, the Mickey Mouse cartoon Get a Horse! which played with Frozen in 2013 and Maui’s tattoos in Moana (2016). He also intermittently stayed busy doing behind-the-scenes work on Paperman, Wreck-It Ralph and Moana doing animation tests and final line work.

Some of my favorite work he has done outside of Disney includes Looney Tunes: Back in Action (2003) in which he worked for Joe Dante as animation director of the Looney Tunes characters (in which he also voiced characters like Tweety and Marvin the Martian).

Goldberg had actually worked on many of the Looney Tunes cartoons of the nineties like Chariots of Fur starring the Coyote and Roadrunner, Pullet Surprise starring Foghorn Leghorn and From Hare to Eternity starring Bugs Bunny and Yosemite Sam. In fact, Eric Goldberg may have animated more famous cartoon characters professionally than any other living animator. In addition to the Looney Tunes characters he animated Mickey Mouse, Donald Duck, Goofy, Tom and Jerry, the Pink Panther and The Simpsons.

I can only hope that one day Eric Goldberg will get another chance to show off his talents. It’s sad to think that his career is over when he clearly has the skill to do some amazing stuff if someone only offered him something worthwhile. Another reason why I hope traditional animation makes a comeback. An animator as great as Goldberg deserves to retire on his own time. 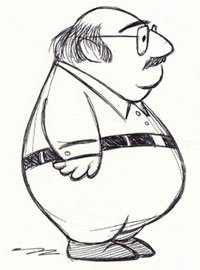