Hollywood is a weird place. Especially if you are a comedian. People tend not to show actors and directors who work in comedy the same respect that people who work in drama get, but comedians tend to be much more versatile, and good comedy tends to be much harder to write, which makes people like Mel Brooks much more deserving of respect than people like Clint Eastwood, but then comedians are more skilled at manipulating people’s emotions. You would pretty much have to be if you wanted to be successful, because it’s easy to tell what isn’t funny when no one is laughing. A certain pressure that a production like Les Misérables does not have, but a single half hour of The Simpsons does.

Not only is this one of the reasons why I love comedians. It is one of the reasons why I respect them. A person like Robin Williams is the perfect example. Williams acted in film, he acted in television, he did drama, he did comedy, he did voice acting for animation, and he did stand-up comedy. How many stand-up comedians do you know who won an Oscar? For a role in a drama??

The versatility of most comedians demonstrates a certain type of yin and yang for their careers, and this can widen a celebrity’s fan base. The celebrity I will use as an example is Gilbert Gottfried (because I already wrote a blog about Robin Williams).

I’m kidding! Gilbert Gottfried is actually one of my favorite comedians in the world. A lot of kids will recognize him as the voice of Iago the parrot from Disney’s Aladdin, Digit from the PBS series Cyberchase, and Kraang from Ninja Turtles, but many adults will probably recognize him from eighties movies like Beverly Hills Cop II and Problem Child, and the cable network MTV (back when MTV was MTV).

I’m a Disney fan and I was born in 1989, so my introduction to Gottfried was in Aladdin, a movie that made a huge impression on me. To this day it is still one of my family’s favorite Disney films and it holds up as a hilarious comedy. So naturally I became a fan of Gottfried because of that movie and now I follow his career (or what’s left of it) very closely.

Would I still be listening to him and Frank Santopadre discuss classic films with many of my favorite Hollywood veterans on Gilbert Gottfried’s Amazing Colossal Podcast if I didn’t watch Aladdin? It’s a scary thought but perhaps I wouldn’t.

To illustrate how different Gilbert Gottfried’s two career paths are, I’m going to separate this blog in two. I will call the first part “The Yin,” and the second part “The Yang.” 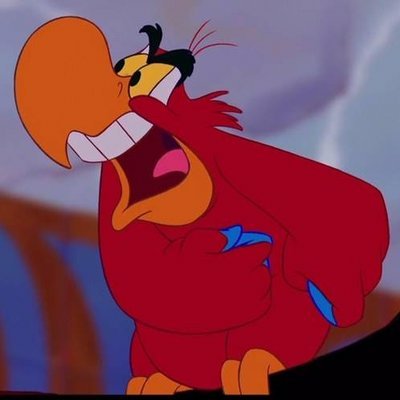 He started to gain a following, and those who knew about him found him hilarious, including the directors of Disney’s Aladdin, John Musker and Ron Clements, who decided to cast him as the villain’s sidekick Iago the parrot, which became his most famous role.

He continued to play Iago in various films, shows and video games (The Return of Jafar, House of Mouse, Kingdom Hearts, etc.) and started to become a reliable voice actor for most of his career.

Other animated films and shows for which he provided voice work include Don Bluth’s Thumbelina, Dr. Dolittle, The Ren & Stimpy Show, Superman: The Animated Series, The Fairly Oddparents and Cyberchase.

He is also recognized for his various commercial voice-acting roles where he played such characters as the Aflac duck, the Pop Tarts toaster, Clippy the Microsoft office assistant and at one point a talking smoke detector in a fire safety ad campaign.

Gottfried has one of the most recognizable voices in animation. It certainly wasn’t a career path he expected to go down, but now when most kids and adults hear his voice, they can’t help but smile. That includes me. That loud and annoying voice is a part of my childhood and it still makes me laugh as an adult.

Comedian Gilbert Gottfried was born on Coney Island in 1955 and had been telling jokes since he was a kid. He had been doing stand up since he was 15 years old and throughout the seventies was known as a comedian’s comedian (a comedian who makes other comedians laugh) before finally hitting television in the eighties.

I’m not a person who minds filthy humor if the jokes are well-written, but the incident got him blacklisted by Hollywood and as a result he has never really reached A-list fame.

One of his most notorious moments happened at the Hugh Hefner Friars Club Roast when he made a 9/11 joke (the first public example of 9/11 humor), and a joke about the earthquake disaster in Japan he made on Twitter in 2011 led to him being fired as the voice of the Aflac duck.

Gottfried has been criticized for being tasteless and for telling “too soon” jokes about tragedies, but his fearless ability to make almost anything funny is one of the reasons why I like him. He won’t be entering the mainstream any time soon, but there’s nothing I love more than making people laugh, which he always does.

Despite his reputation, he has appeared in many famous TV series, including The Tonight Show, The Cosby Show, Wings, Married…with Children, CSI, Law & Order: SVU, Hannah Montana, Sesame Street, Episodes and The Marvelous Mrs. Maisel.

I recommend reading his 2011 autobiography Rubber Balls and Liquor (if you don’t get easily offended). It may be the hardest I’ve ever laughed reading a book. 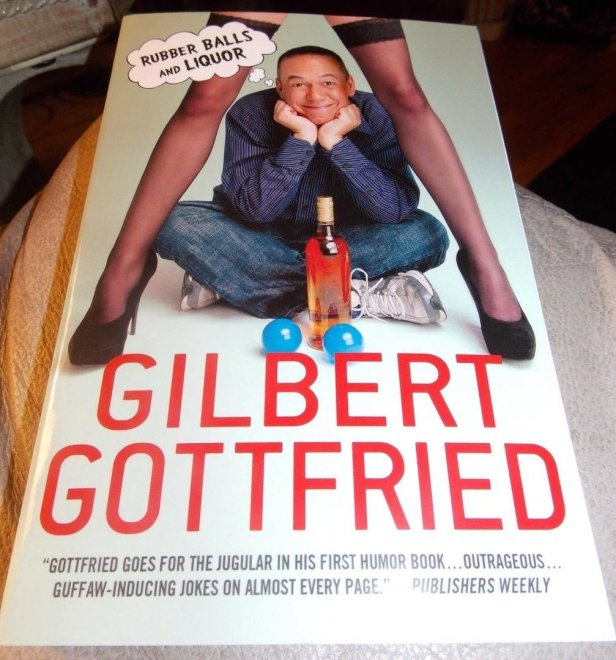 Horror author Stephen King said that if we had Gilbert Gottfried in World War II, Hitler would have given up in 1942.

2 thoughts on “The Yin and Yang of Gilbert Gottfried”