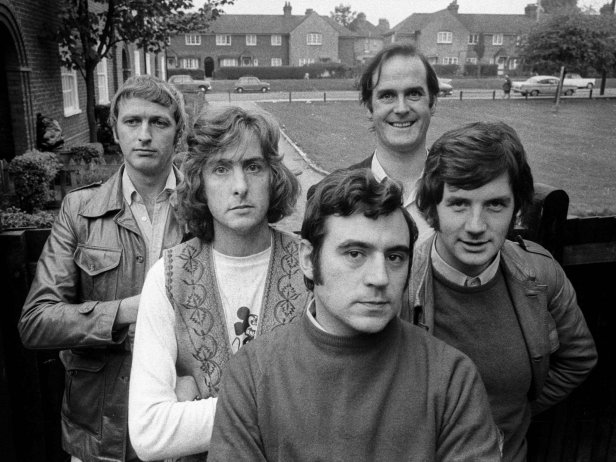 Much in the way that Star Wars changed film and The Beatles changed music, Monty Python’s Flying Circus changed comedy.

Monty Python was the collective name of a sketch comedy group from Britain that consisted of John Cleese, Graham Chapman, Michael Palin, Terry Jones, Eric Idle and Terry Gilliam. They first gained fame for their sketch comedy television series Monty Python’s Flying Circus which aired on BBC for four seasons from 1969 to 1974. The Pythons were responsible for their own writing and performing and their creative freedom led to a different type of humor from what had previously been done in the early 20th century. They pretty much changed the way comedy was written and their influence can still be seen in almost every modern comedy to this day.

The origin of the group can be traced back to two places: Oxford University and Cambridge University.

Two of the Pythons, Terry Jones and Michael Palin, had first met at Oxford where they performed in the comedy group the Oxford Revue, a group whose alums include British comedians Dudley Moore, Alan Bennett and Rowan Atkinson. Graham Chapman and John Cleese had met at Cambridge and Eric Idle attended a year later, all three performers at the Cambridge University Footlights amateur theater club, whose alums include such famous Brits as Stephen Fry, Hugh Laurie and Emma Thompson. 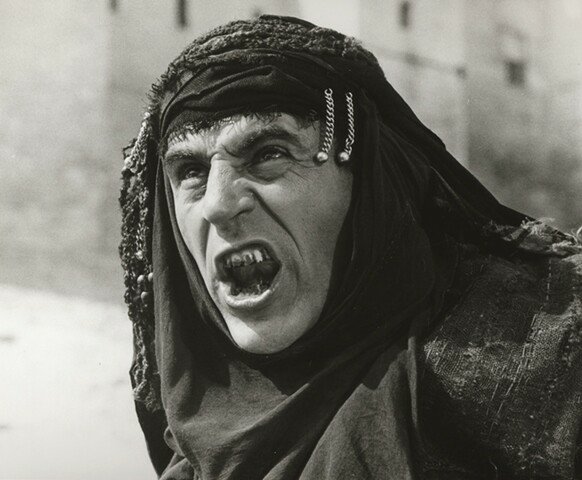 All five of them were responsible for writing and performing shows while they attended these schools, such as a popular radio comedy called I’m Sorry, I’ll Read That Again and eventually TV shows such as BBC news satire program The Frost Report (1966-67) and an ITV sketch comedy series with a style that anticipated Flying Circus called Do Not Adjust Your Set (1967-69). 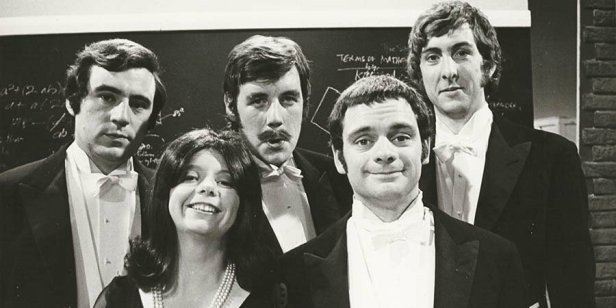 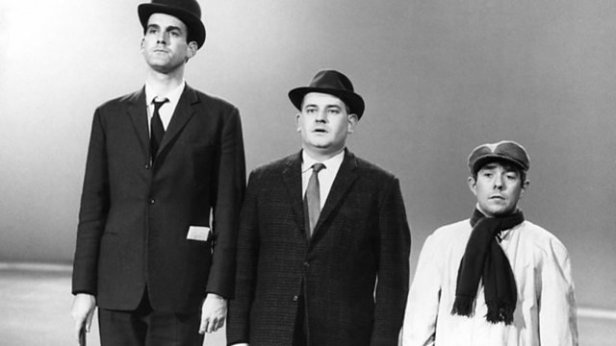 BBC had liked what the writing team of John Cleese and Graham Chapman had been making for them so the TV network offered them their own show. Cleese was reluctant to do a two-man show and so he invited Michael Palin to join them because he was a more enjoyable working partner than Chapman. Palin in turn brought along his writing partner Terry Jones and his colleague Eric Idle.

Terry Gilliam (the future director who would go on to make films like Time Bandits, The Fisher King and Fear and Loathing in Las Vegas) had first met John Cleese when the Footlights toured in New York City. Gilliam was a Minnesota-born artist and strip cartoonist. A “Most Likely to Succeed” voted straight-As student who read Mad Magazine, he was hired to do some animation for the TV series Do Not Adjust Your Set, which the Pythons remembered about when they decided to hire him to make animation for their new show.

The name “Monty Python’s Flying Circus” has multiple accounts of origin but the Pythons tend to agree that the name was meaningless and they just chose it because it sounds funny.

The six members assembled and had a very definite vision for what they wanted the show to be. Influences on the show would include Spike Milligan’s The Goon Show and British comedy revue Beyond the Fringe featuring Peter Cook, Alan Bennett, Jonathan Miller and Dudley Moore. A show that exemplified the British satire boom of the late fifties.

Although one thing about these shows that the Pythons wanted to change was their tendency to ruin their hilarious scenes with unfunny punchlines. This influenced Monty Python’s wacky style of ending sketches in the middle of the performances. Often the sketches would be stitched together in absurd and surreal transitions and Terry Gilliam’s cut-out animation.

Goon Show creator Spike Milligan actually had a show in 1969 called Q… that the Pythons watched and it had a more irreverent style than other British comedies, Milligan often giving up on his own sketches and walking off the set in bewilderment that he had written something so dumb. This inspired the Pythons to be even more innovative to differentiate themselves creatively from Milligan.

The Pythons each had their own writing style that contributed to a feeling of variety in the series. John Cleese and Graham Chapman were often paired together in the writing room (largely being the ones responsible for the sketches that involved yelling and insults). Terry Jones and Michael Palin were the writing team who were mainly responsible for the feel and presentation of the show along with Terry Gilliam, who was free to bridge the sketches the way he wanted with his cartoons. Eric Idle would often write by himself. They would all meet and exchange ideas while critiquing each other’s scripts and the episode would be shaped. It was a very democratic writing process where the majority vote would be responsible for determining whether a joke was funny enough to get on the air.

Sketches would often parody British life. They included the “Dead Parrot Sketch” (a satire on poor customer service), “The Lumberjack Song” (which made fun of the manliness of lumberjacks), “Nudge Nudge” (a sketch about a man who is a little too comfortable talking to a stranger about his sex life, but it has a twist ending!), “The Funniest Joke in the World” (where people literally die laughing after reading it) and other silly and absurd sketches that have stood the test of time like “The Spanish Inquisition,” “Upper Class Twat of the Year,” “Hell’s Grannies” and my personal favorite starring Michael Palin as a milkman being lured into his customer’s house.

One of the sketches actually coined a popular term that we all use in everyday life. The term “spam,” which is commonly used to describe unsolicited and unwanted messages that are sent to us via the internet, was derived from a Monty Python sketch about customers who ordered from a breakfast menu that included spam in almost every dish, a parody of the mass rationing of spam in the UK following World War II and the British public’s growing fatigue with eating it.

The show was a hit in Britain and soon began airing around the world. It was so funny and different from other comedies at the time that when CBC aired the show in Canada and cancelled it in the middle of its second season, they received so many complaints from Canadian viewers that they were prompted to bring it back. It was a staple of Canadian television in the early seventies.

PBS had aired the show in America and its popularity led to the station broadcasting other British comedies regularly, leading to shows like Are You Being Served? also gaining audiences in the US.

The popularity of the show led to films which are just as funny. Starting with a film adaptation of the series called And Now for Something Completely Different (1971) and followed by the original films Monty Python and the Holy Grail (1975) a parody of King Arthur, Monty Python’s Life of Brian (1979) a parody of the New Testament, and The Meaning of Life (1983) a parody of mankind itself.

The absurd style of Monty Python was influential towards the Austin Powers film series, Sacha Baron Cohen, “Weird Al” Yankovic, The Simpsons, South Park, Family Guy and an indirect influence on countless other films and shows. Monty Python was like a slap in the face to conventional humor, inspiring writers and comedians around the world to be darker, zanier and more free with their comedy.

4 thoughts on “A Fish Slap in the Face: The Humor of Monty Python”