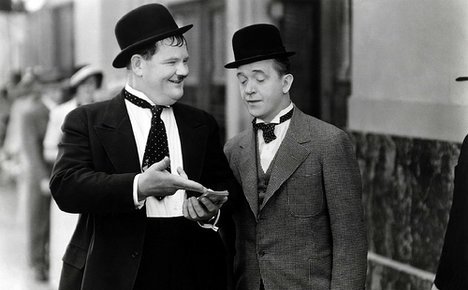 A number of comedians rose to fame in the 1920s, the best of which have made comedies that are still funny to this day. In these days, comedians were all silent film stars who excelled in slapstick, and seeing as how sound had invaded films by the 1930s, the 1920s would be the beginning and end of many of their careers, and that was true of every kind of performer in Hollywood, comedic or not.

Stan Laurel and Oliver Hardy as a duo are my favorite comedians of the silent film era besides Charlie Chaplin. Their films were often simplistic and they usually progressed from a gag-to-gag basis eventually ending in a chaotic and funny finale, but they had astoundingly good chemistry that resulted in typically hilarious films.

They were complete opposites on screen, Laurel the sneaky and overly sensitive wimp and Hardy the pompous bully and know-it-all, and their well-defined personalities played well off of each other.

English comedian Stan Laurel got his career started in music hall performing pantomime in comedy sketches. He was Charlie Chaplin’s understudy during their time working on stage with slapstick pioneer Fred Karno, and Laurel and Chaplin actually both arrived in America at the same time when the Karno troupe toured abroad.

Oliver Hardy was an American comedian who fell in love with movies and was convinced he could do a better job than the actors he saw on screen. Thanks to a tip from a friend who told Hardy that they were making movies in Florida, Hardy moved to Jacksonville in 1913 and worked as a cabaret and vaudeville performer before being cast in his first film Outwitting Dad a year later.

He was cast in many shorts (often as the villain and the heavy) for Pathé, Lubin and Edison in New York, and later moved to L.A. in 1917 and freelanced until he worked for Vitagraph, with which he made 40 films.

The first time Laurel and Hardy appeared on screen together was in the short film The Lucky Dog (1921) in which Hardy played a robber holding up Stan’s character.

They weren’t a comedy duo yet, but later Hardy was hired by Hal Roach Studios (producer of Charley Chase and Little Rascals shorts, not to mention Mack Sennett’s biggest rival), and when he was unavailable to work, Stan Laurel would take his place. Finally Hal Roach decided to keep them both and the studio teamed them up in the same film.

Audiences loved the two’s chemistry and the studio began teaming them up regularly.

They eventually moved from short films to feature films, many of which were brilliant and funny. My absolute favorite is Way Out West (1937) but you would have a hard time finding one that isn’t utterly enjoyable.

The two remained with Hal Roach until 1940 and remain popular and influential, having become the classic archetype for comedic duos that can still be felt in comedies like The Honeymooners, Ren and Stimpy and Kenan & Kel.

Harold Lloyd never made deep films but he was a great physical comedian who liked to find comedy in the mundane.

He made nearly 200 comedies between 1917 and 1947 but he was at his peak in the 1920s when he was known best for playing the meek but clever little go-getter in the glasses with the ambitious spirit who was perfectly in tune with the attitude of the times.

Lloyd was a talented acrobatic performer who acted in many chase scenes and thrill sequences.

His feature film Safety Last! (1923) not only holds up as a funny comedy but Lloyd’s ascent up a city building remains suspenseful to this day.

He worked with the Edison studio, Keystone and was soon discovered by Hal Roach after Universal hired Lloyd as an extra.

Lloyd made some popular films in this decade, including Grandma’s Boy (1922) and Why Worry? (1923), and even the films he produced independently after separating from Hal Roach were popular, such as The Freshman (1925) and The Kid Brother (1927), which many consider a couple of his finest films.

His go-getting screen persona did not survive into the 1930s as his attitude did not match the mood of the country during The Great Depression.

Harry Langdon was the opposite of Harold Lloyd. He was more subtle and his comedy came from emotional reactions rather than physical feats.

Langdon performed sketches on the Vaudeville circuit starting in 1906 and after years of performing on stage, he joined Mack Sennett’s studio (the comedy studio where Charlie Chaplin rose to fame) in 1924 and became a major star with a series of features directed by Frank Capra in 1926 and 1927.

His persona was that of a wide-eyed childlike innocent. He was a master at pantomime but his films were more gentle than the slapstick that was common at the time. 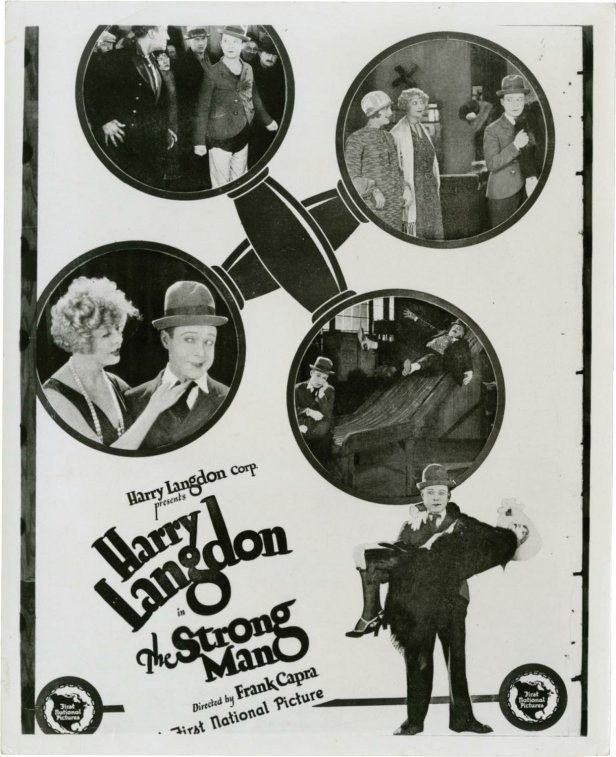 He failed when he left Sennett to produce his own films in 1928 and that may have been a combination of his lack of experience directing and his fading appeal in the era of sound.

He remained an actor in low-budget shorts into the forties playing mild-mannered goofs until his death in 1944.

Buster Keaton is one of the most highly regarded filmmakers of all time. He is the most cinematically innovative comedian in film history. He is the director/comedian who most directly rivaled Charlie Chaplin but he still managed to have his own original style. Chaplin’s films were sentimental. Keaton’s style was more dry.

A performer since the age of three with his family known as The Three Keatons, where he performed physical comedy. He learned at a young age about many rules of comedy. For example, Keaton learned that the audience laughed more when his face remained expressionless, which is how he later came to be known as “The Great Stone Face.”

He began working in the film industry in New York while still in his twenties and he brought his physical skills and technical innovation to the screen with hilarious gags like these ones from Steamboat Bill Jr. (1928).

He made some of the best films of the silent era. My personal favorites of his are Our Hospitality (1923), Sherlock Jr. (1924) and his Civil War comedy The General (1926), the film that first turned my brother and I into Buster Keaton fans. Orson Welles called it perhaps the greatest film ever made.

These days critics and organizations like the American Film Institute hold The General in high regard but at the time people didn’t recognize its brilliance and some even thought a comedy about the Civil War was in poor taste.

Nothing he made at MGM was a classic, but no one can take away the legacy he created in the 1920s. He not only had a firm grasp on great comedy but he pushed the boundaries of what was possible on film.